how do you turn off the music/sound?

Im gonna make a "Tas" for the game in a bit

Might take a bit longer since i wanna polish it up

Omg, i realized i said "polish it up" when this game is all about polishing up the game lmao

Reply
Neco The Sergal262 days ago

you should definitely publish this to steam!

would love an option to rebind

i don't know if is fixed but just to be sure 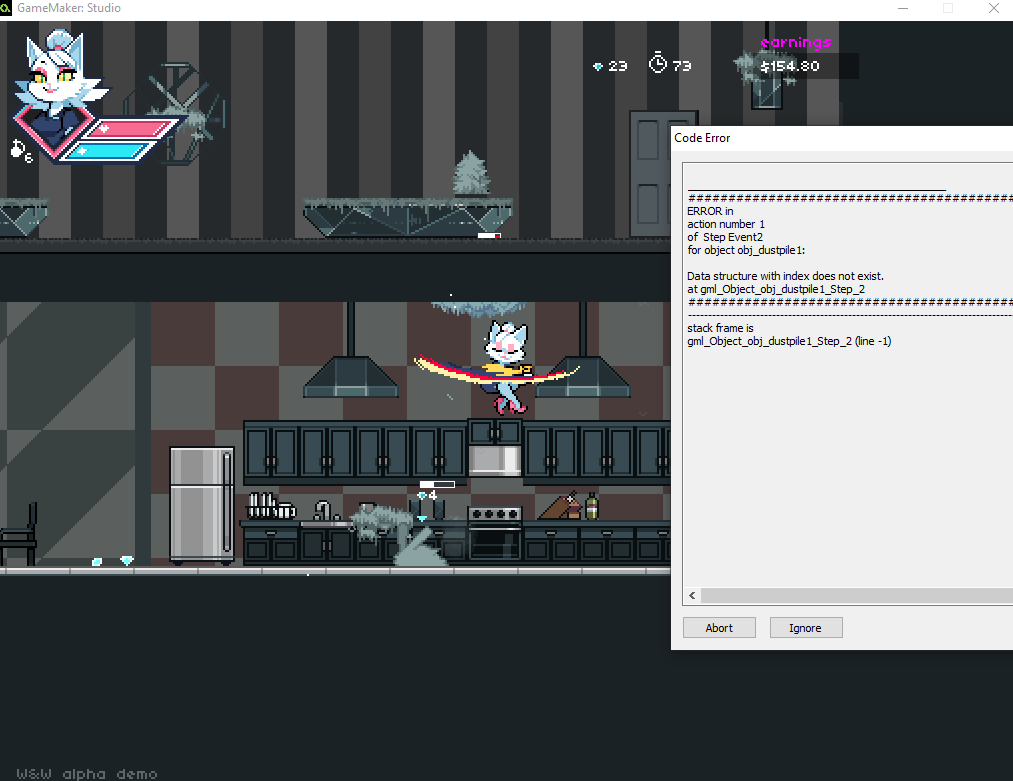 I saw any furry-related stuff then I had to try it. 😂

BTW is there a way to adjust volume of music or audio?

Thanks for playing :) No volume adjustment yet but there will be soon

In the next demo is it possible to program a training room? I love the movement and combat so much and having a dedicated room to learn combos will be  a great feature!!!

Yep! I've got a fun practice room in the works :) Thanks for playing!

i love this so much

cant wait for it to be finished

You know fighting games like this are great when the controls follow the JKL UIO keyboard controls. The combos and the game itself is awesome.

another thing, idk if it is supposed to do this or if it is a bug, after I finish the third level, it sends me back to the first one, is that ok? From developer to developer I understand if that is how far you have got for now

phew that's good, I thought my download was corrupted by my slow connection =o=

Looking REALLY forward to this, I'M IN FREAKING LOVE WITH THIS GAME

Great stuff! Loving It! But there's this weird thing where the game doesnt work or register inputs unless if i click off of it?

Thanks for playing! Hopefully in the next demo release things will be better

I would want to play this..but everytime I try to...No buttons seem to DO anything...

Running into a similar issue, when the initial 'warning this is a demo' screen shows up, it say s"Press A" but pressing A on both XBox gamepad and on the keyboard do nothing. 1/2/3/4 for setting resolution and rumble work, but that seems to be it.

Sorry its not working properly, hopefully things work right in the next demo

Looking forward to it!

Finally gave it a spin (it does work for me now) and SUPER enjoyed it.

When the worst aspect of something is "it's too short" -- and it's stated to not be complete yet -- y'know that's a winner in the making right there.

Eagerly (but patiently) awaiting its arrival on Switch in a completed form.

Sorry you're not able to play :') I've been working to resolve this. Hopefully the next demo works better

Reply
Joe the flower2 years ago

first off very fun game! the combos are super fun to pull off!

gets a little unconformable  with the keyboard controls since jump is so far away from the dash.  switching jump and grad would better. at least for me.

also i found a bug!

during a combo i get this error message:

cant wait for the final product!

It keeps crashing whenever I press X on my ps4 controller. It's not responding to any keyboard input other than 1, 2 and 3, which is changing screen size and fullscreen. The demo looks amazing and I want to try it, hopefully there's a fix for this. 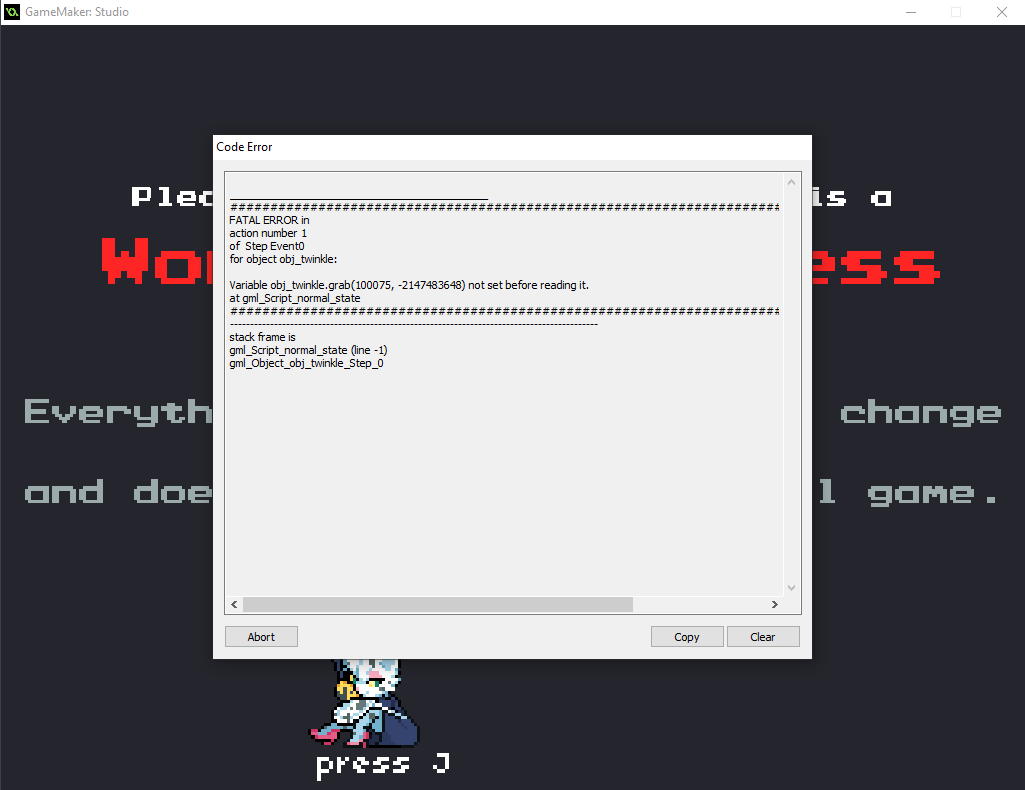 Hey there, will look into this soon. Sorry about that

That game is so fun! I was having a blast moving through dust bunnies and keeping the highest combo possible. Definitely keep going!

hey Aw0!
the demo looks promising and I'm pretty excited about what's new about it.

But I encountered an error while I was playing the second level.
Here's the error message

This game is AMAZING I love everything about it <3

First of all when doing an attack one of the sprites didnt seem complete :/ 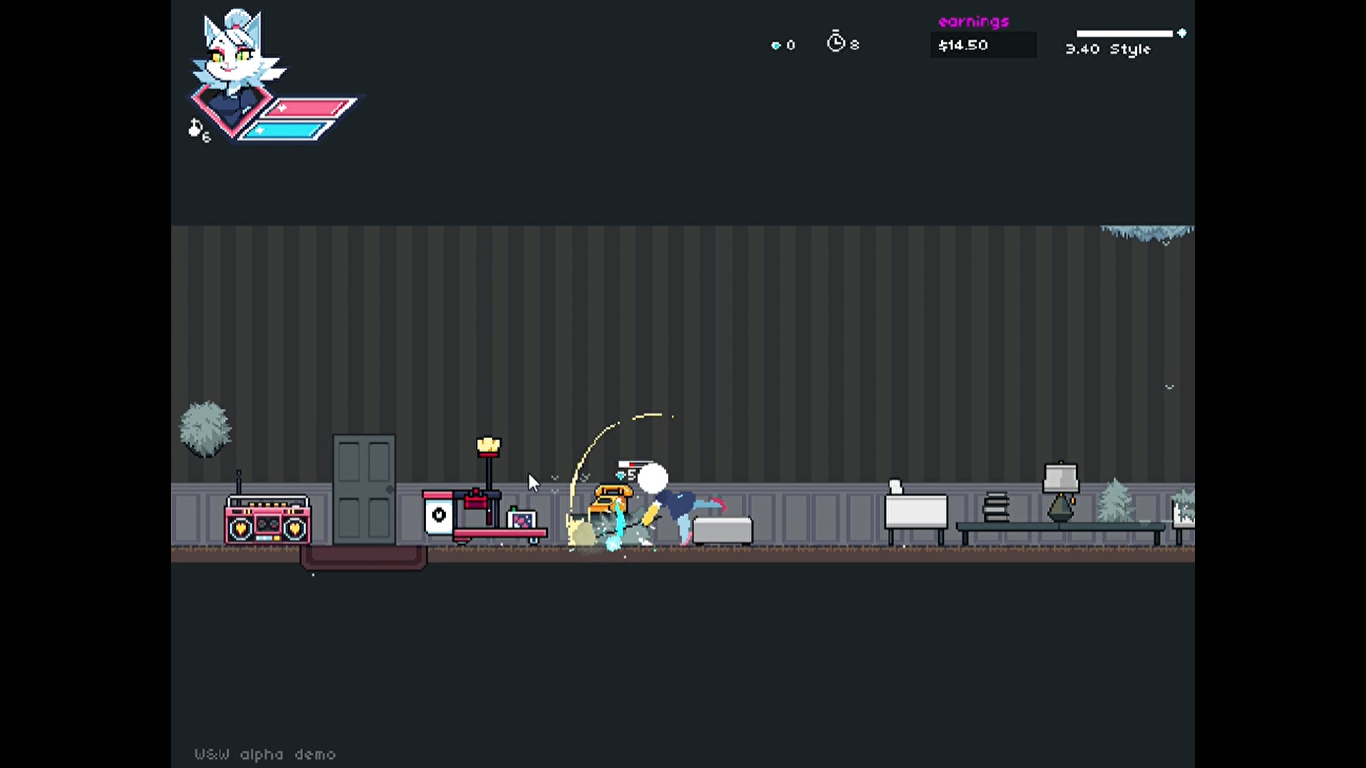 Also, while playing the second "level" this showed up :( I tried to put ignore a bunch of times but I would just pop up again so I had to close the game 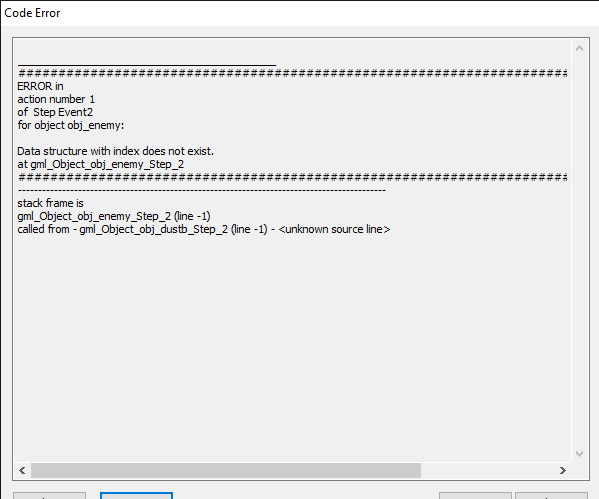 But other than that this game is epic, I absolutely love it! 💖💖💖

Thanks for trying it out :)

But, the attack sprites being incomplete isn't an error... its just not done lol

how does one put so much elegance and class into one moveset. This game is epic, good combat, tho, i will say the game is pretty slow until i clear all the dust and then the game runs smoothly again. Other than that, pretty good stuff. I wanna see this on steam in the future 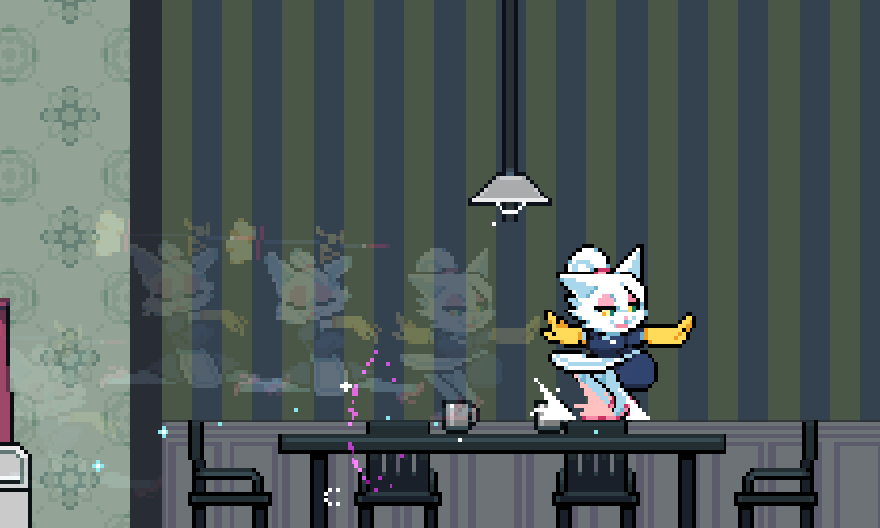 Thanks for playing! :D I'll continue to work on optimization

I'm going to make sure to tell my friends about this!

I'm trying to play the game, but when I start it it crashes 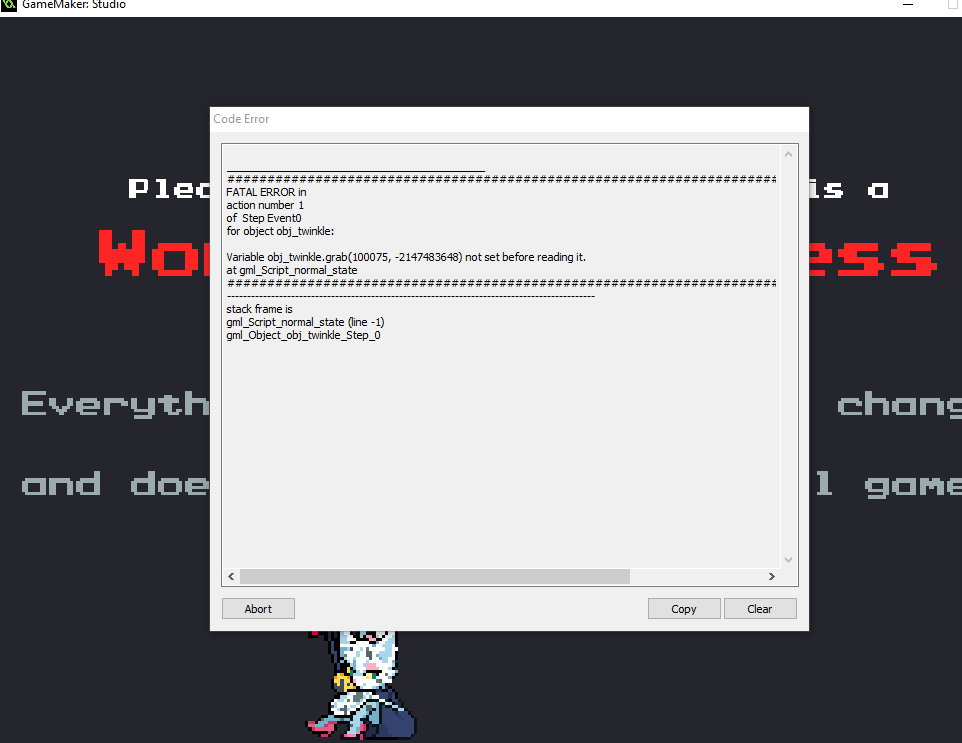 I'll give this a look soon.

I ran into a similar bug when I was trying to grab an enemy. I believe I was mid-jump, or maybe had just landed/was sliding on a surface while grabbing. If it happens again, I'll grab a screenshot.

I really liked the visual and the style in general. But as a someone that doesn't use Windows, I must ask: is cross-platform planned?  😭 Would love to play W&W in my Mac or desktop PC (the one running Linux).   🙏

Thank you! Yes, other ports will be coming! :D

Makes me really happy to know. I’ve already shown it to my friends and they all seemed to enjoy it too. Keep up the great work!

I really appreciate it! :)

I have two suggestions:

1) A low health warning. Something to show/hear when you're low on health. It seems sudden and the "death" animation makes it look like you go from clean to dirty in a microsecond. Maybe even a secondary health bar above the player's head?

2) Some indication the big enemy is invincible until it attacks. I thought the game was broken as there's no audio or visual feedback to tell you otherwise.

Thanks for the feedback! Been workin on this stuff since this version :) You'll feel a big difference in the next big demo

Such a well-designed game. I can't wait to try out the full version.

huge potential right here, with excellent designs and crisp animations. i'm completely in love with anything going for this game

Absolutely lovely game AwO. I'l be keeping an eye out! In the meantime, here's a showcase video :3

Saw a gif of it on twitter, instantly downloaded it.

I don't usually like pixel art work but the mix of smash-inspired attacks and having to beat the crap out of dust bunnies to get paid was too cool to pass off.

I spent a lot of time combo'ing the dust bunnies that I must have heard the *shrieks* so many times. Everything is very satisfying to pull off especially the helicopter (Up-Air Charged)

I will say one thing tho, I tried it on my 3rd-Party Switch Controller and it didn't register. The controller is fine cause I've played other games with it on PC and I checked if it was registering in Unity.

This one is in the collection for sure, excited to see what comes next :3

It's coming out marvelously!  The only thing I can think could be improved on would be platform drop down mechanic.

in such a fast pace and fluid game, having to have to hold down on a thin platform for a second it takes away from the flow that the game has to offer.  Something like down+jump command I think would work nicely for situations like where you would need to drop down quickly.

Other then that It is really fun and fluid to play! the animations are absolutely adorable all the movement options you have make it extremely satisfying to play around with when experimenting the her moveset.  I can't wait to see it finished!

Finally got a chance to play it.

I'd say the game is shaping up nicely! The spritework is gorgeous, and the gameplay is pretty fun, though I think I might need more time to properly evaluate it!

First of all I would like to say, your game has an amazing gamefeel with beautiful and fluid animations and a great use of hitbox and physical interaction and it is very, very fun to play.

I think the jump physics a bit too floaty...
understands that a very air based game and i love it, but it would be nice
if you made her jump more faster and with more inertia
but maintaining yout duration and altitude.

The animation of spinning the broom in the air (https://twitter.com/i/status/1200581849678045184)
It's a lot of fun to perform, it's my favorite. but think the input to perform its a little complicated at first, when I played the second time I realized that I can not hold  "->"  to execute it, but it makes air control a little difficult.
I understand how it works, but I think you could make an easier input for it.

I think the dash jump could be more fluid, like in Megaman X, Zero, ZX etc.
maybe  could have a different animation for double jump, like she doing a little spin in the air. the enemies could have a health bar for  better indicate to the player how much is left to be defeated.

For last, I think it would be interesting to add a hit when the character slides in the ground while sweeping, maybe executable after the dash or after the slide. and maybe the hit down in the air would throw the enemy down. and would be good support for PS4 control, and option to map any keyboard / control button to the actions you want.

I loved the music, I think the choice of Lo-fi / Chilloute combines well, and that other genres like Jazz and Bossa Nova combine  as well too. I've been following your project for a while, and I really like what I played, good work and keep it up.

Thank you for the feedback! :)